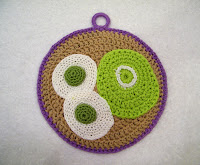 This post includes the pattern, photos and how-to's for crocheting a Green Eggs and Ham Potholder. If we didn't grow up on this book ourselves, then we certainly read it (many times) to our children and/or grandchildren. Maybe this potholder will continue to add to happy memories of this classic Dr. Suess book.
You are welcome to use this pattern. When sharing your project online or in print, please attribute your completed project to this pattern/site. Thanks. There are no other restrictions for its use. 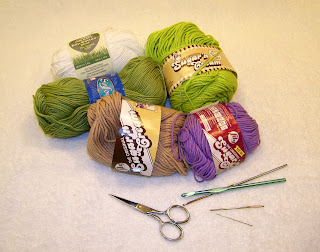 General Information: Use cotton threads and yarns for potholders to endure the heat. Synthetic fibers, such as acrylic, are not recommended because they can burn or melt.
Photo 1: Supplies
Pictured here are supplies and tools needed to complete a potholder using this pattern.
Yarns: There are different weights of yarns for different parts of the finished potholder. Lily's Sugar 'n Cream (Jute) for the basic front and back "plate" on which the eggs and ham will sit. The purple border is also Lily Sugar 'n Cream but the color is Lilac. The ham is another Lily Sugar 'n Cream color called Hot Green. The white bone is Omega Sinfonia. Another white, Paton's Grace (Snow) makes the egg whites with the yokes of Omega Sinfonia (Olivio Intensio). Tools and other supplies: crochet hooks H and F, scissors and blunt-nosed needles. Not pictured but important: One plastic ring size 1 and 1/8" (purchased cheaply in fabric stores in a small package of 12-14 per package) is used for the hanger. 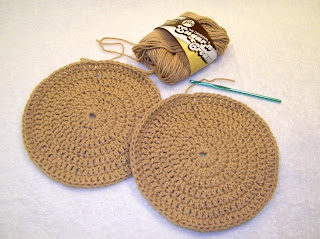 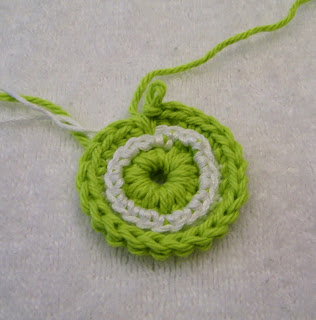 Photo 3: Ham, Beginning
Foundation: With the H hook and the heavier cotton, chain 5. Sl st to form a circle.
Round 1: Ch 1, 11 sc's around the loop. Sl st. to join at the top of the ch 1. DO NOT break off green.
Round 2: To make the ham bone, switch to the smaller hook (F) and thinner white, Omega Sinfonia or Paton's Grace. Ch 1 and the 2 sc's in each of the front loops around. Sl st to first ch 1. Do not be concerned if this round cups. It will lay down after the next round.
Round 3: Still using the smaller hook and white, pick up the back loop of white, then go into the back loop of the green and make a sc. Do this around. Sl to the start and break off. This round will produce a nice ridge to simulate a bone.
Round 4: Still using the small hook, to enable you to go into the thinner white yarn, pick up the green again and loosely crochet sc's around the sides of the bone.
Round 5: Before beginning this round, the theory behind is that you are going to shape the ham to be larger on one end than the other. To accomplish this, you will be crocheting sc's at the top end, dc's at the opposite end, and a few hdc's on the sides as transition stitches. Using the H hook, begin the ham shaping. The exact number of stitches is unimportant. Start by making a sl st to the top of the ch 1. As a guideline, this ham has 7 dc's and some of those were increases, then 2-4 hdc's on the right side. At the top, there are about 12 sc's. The left side again repeats 2-4 hdc's. This ham has a total of 25 st's for this round. Yours may vary somewhat.
Round 6: Continue with the dc's, hdc's and sc's to shape the ham by paying attention where you need to increase to gain a flat ham. Remember, the sc's are at the top, a few hdc's are on the sides and the dc's are on the bottom. This ham has 31 st's on this round. 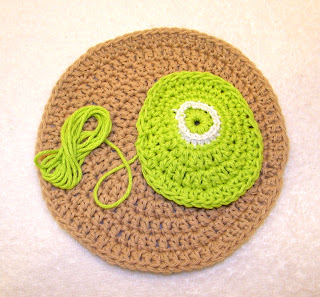 Photo 4: Completing the Ham
Round 7: Continue as in rounds 6 and 7. This ham finishes this round with 38 st's: 15 dc's, 3 hdc's on each side and 17 sc's on the upper part. At this point, check to see if this is the right size ham for your plate.
For this potholder, I am stopping here. Other similar potholders (see photo 11 below) will show that the hams can be larger. It is matter of personal choice. If you want the ham to cover a larger plate area, crochet another round.
Finish off by sl stitching to the starting ch 1. Before cutting the yarn, leave at least a 36" tail for attaching the ham to the plate during the assembly process. DO NOT attach it now. 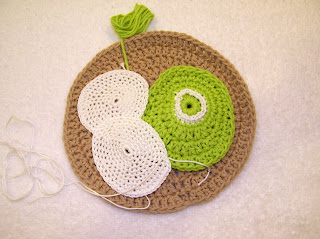 Photo 5: Eggs
Note: I recommend Paton's Grace (Snow) for the yarn because of its sheen (like eggs) and because very close sc stitches can be achieved. J&P Coats Royale Fashion Crochet Thread #3 would be a good second choice. However, because of availability or yarn or what is in your stash at hand, use whatever works for you. If you use a heavier yarn, you will need to use a larger hook.
Foundation: With F hook, ch 4, sl st to make a loop.
All rounds: Sc all rows in a spiral with the goal to make an asymmetrical egg. To achieve an oblong or oval egg, make your sc increases at either end, rather than the sides. Stop when you think you have an egg that is the size and shape that works on your plate with the ham. Sl st, before cutting, leave a 30" tail for later assembly. You may need to steam press from the back side to flatten the eggs. Do that now so that it dries before you make the yokes. 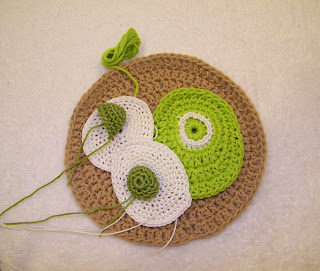 Photo 6: Yokes
The idea behind the shape of the yokes is to make it like a large gumdrop. The final row will be tucked under when attached to the egg white.
Foundation: With the F hook, ch 4, sl to first ch and make a loop.
All Rounds: Sc in a spiral without making rows. Increase sc's the first few few spirals to make the yoke flat and then in subsequent rounds, only increase minimally to make the yoke take on the gumdrop shape. You will end with one round that will be tucked under, inside the yoke so allow for a little more length than just what will be visible. Leave an 18" tail after you sl st to end.
In Photo 6, the lower yoke is in the correct position (facing up) while the upper yoke is on it's side to show the shape. 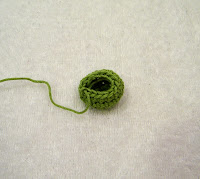 Photo 7: Yoke, rolled
This photo shows the yoke upside down with a row of stitches curled inward. This is the way you want the yoke when you turn it over and attach it to an egg white.
Photo 8: Assembly 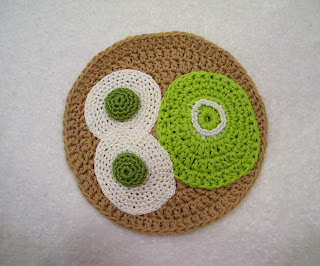 Step 1: Begin by stitching the yokes to the egg whites before the whites are attached to the front plate. Use your green yarn tails and the smaller of the two blunt-nosed needles to sew the yokes to the whites.
Step 2: Before sewing onto the plate, determine placement of the ham and the two eggs on the plate. The ham should go on first as you may want to overlap one or both of the eggs on the top of it.
Step 3: Once you determine your final placement, remove the two eggs and begin by stitching the ham to the front plate. To make clean and invisible stitching, go around the posts of the final round rather than the tops of the stitches. Secure the green ends of yarn in the back of the plate.
Step 3: Again return the eggs to the plate to check your placement. Some overlapping is recommended for graphic interest. Remove the egg that goes on last and stitch the other egg in place. In this example the first egg to be stitched into place is the one nearest the top of the potholder. Again, using the log yarn tail left and the smaller blunt-nosed needle stitch into place going around the posts of the final spiral round. Also, you may want to make a few stitches more toward the center to keep the egg flat for future use and washings.
Step 4: Stitch the second egg in place. Secure loose ends in the back. 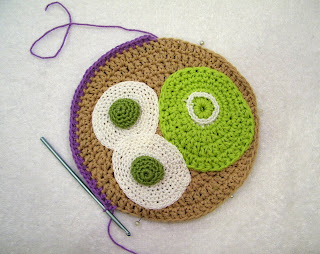 Photo 9: Final Assembly
Step 1: Line up the front plate to match the back plate and pin together. Large corsage pins are handy for this step.
Step 2: Determine the exact middle top and start there with a contrasting color (Sugar 'n Cream, Lilac) leaving a 10-12 inch tail for later use when attaching the plastic hanging ring.
Step 3: Using an H hook, hdc around the entire plate increasing as necessary for the edging and plate to lie flat.
Step 4: When you reach the starting point, leave a 30-36 inch tail to cover the plastic ring, as explained in the steps of the next photo. 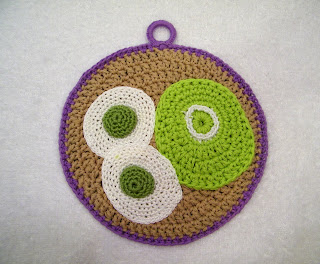 Photo 10: Plastic Ring
Step 1: With the large blunt-nosed needle and the shorter of the two yarn tails, secure and attach the plastic ring to the top of the potholder by going around the ring and discreetly into the purple edging 4-6 times.
Step 2: With the large blunt-nosed needle and the larger of the two yarn tails, make tight button hole stitches (also called blanket stitch) around the entire ring and in the process covering up the first few attaching stitches made with the shorter tail.
Step 3: Secure your yarn ends. All done.
Photo 11: Green, Purple, Blue and Orange Eggs and Ham
Might as well have a little fun with this! Why stop at Green Eggs and Ham? I wonder what Sam-I-Am would say about orange eggs and ham... 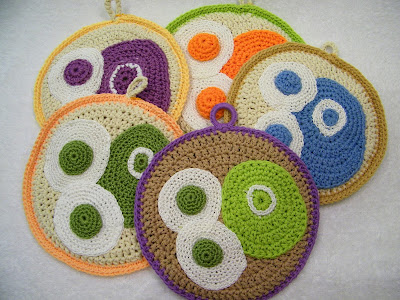 Copyright 2010. Delights/C.Lowman. All Rights Reserved.
Posted by Claudia at 1:34 PM