At the time of this posting it is April and nearly two weeks before Easter, 2011. Lately I have been sharing Easter egg cozy patterns to knit or crochet, which are fun and lighthearted, but now it's time to shift gears and share something more traditional and very beautiful—Ukrainian eggs. I have admired the beauty of this art form since I was a teen after seeing amazing photographs of them in a National Geographic magazine. 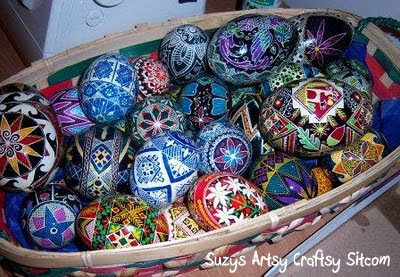 One of my ravelry friends, Suzy, makes Ukrainian eggs (seen above) and it is my pleasure to share a few of her eggs with you and to tell you a little about them, in general.


Here are two of Suzy's eggs, which she sells on etsy. I'll provide a link at the end of this blog page to her tutorial on making them and another link to her etsy shop, in case you are inspired to purchase one to include as a part of your Easter traditions. Suzy calls the egg on the left, "Birds of a Feather" and it is a good representative of the geometric shapes often seen on Ukrainian eggs. The photo on the right is an egg that she calls "Bumblebee Party."


A Little Info About Ukrainian Eggs

What: Remember when you were a child and you used a crayon to write your name or draw a flower or heart on an egg before lowering down it into the cup of egg dye? If so, you will understand in a limited way about the process of making Ukrainian eggs. Ukrainian eggs are decorated eggs that go through a series of dye colors but instead of using a crayon between the color baths, a more finite stylus-type tool called a kystka or kistka is loaded with hot beeswax to scribe lines and designs onto the egg. These fine lines of wax prevent the dye from penetrating so that whatever color is underneath the wax at that step is preserved as it goes into the next color. The dyes start with lighter colors, like yellow, and go through progressions of colors to end with darker ones, such as black or purple.


At the conclusion, when all of the dye baths are complete, the egg is mostly covered with wax which then needs to be removed. The egg is carefully warmed so that the softened beeswax can be gently wiped away to reveal a treasured, jewel-toned keepsake: a pysanka.


Pysanka is the word given to a Ukrainian egg. It comes from the word psyalty which means "to write" because the lines and designs are meticulously scribed, like writing, with wax using the kystka, rather than painted with a brush.


Where: Since the term "Ukrainian" is so prominent in this art form, it might be helpful to show you where this country is located and where this form of decorating eggs evolved. The Ukraine is in Eastern Europe where some of its nearest neighbors are Russia, Poland and Hungary. It also borders on the Black Sea. 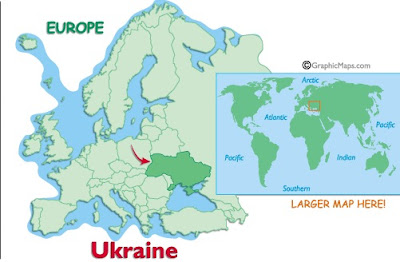 Who: After the children were put to sleep at night, Ukrainian women set about creating their eggs by candlelight. Because each egg is such a fine work of art, it could take a few evenings from start to finish for just one egg. With plans to share an individually designed egg for each family member, plus eggs for friends and significant community leaders, preparations began many weeks before Easter to complete all of the eggs in time for an Easter morning blessing by the priest at church. The larger the family and their community connections, the more eggs had to be readied. In a large, extended family as many as 60 eggs might need to be completed and that would be more than one woman could produce in a matter of weeks. As a consequence, mothers passed down their designs and secrets for making the eggs to their daughters. Working side by side, mothers and their older daughters created the eggs and thus by sharing and cooperative creating, the tradition was also kept alive from generation to generation over hundreds of years.
When: Long before Christianity was introduced to this geographical area, Ukrainian women decorated eggs. Because of their relative fragility, early samples did not survive but ceramic replications dating back to ancient times have been found. The eggs and design symbols, once representing deities, later took on Christian meanings and became associated with Easter. The egg itself represented new life, the important Easter message. Added designs and motifs refined or enhanced the meanings beyond the basic symbolism of the egg itself.
There were times in the history of the Ukraine when outside invaders and occupiers attempted to suppress the tradition of pysanky. As Ukrainian families escaped or immigrated into other countries they brought their traditions with them, including how to make the decorated eggs. By settling in North and South America, in particular, the eggs have found appreciative new audiences and even individuals, not brought up in the tradition, who aspire to create them because of their beauty.
The question of "from this...to this" is what Suzy demonstrates in her step-by-step tutorial. Even if you don't plan to ever make an egg for yourself, you might want to see how the process goes from a plain egg to a finely decorated one. To appreciate art, it's good to know the patience, love and skill that goes into the creation.