This is a spur of the moment blog entry. I really planned the next blog to be a crocheted scarf pattern which I’ll be posting soon. As I write this, it's October and Halloween is nearing so I'm sharing this fun little post first in the hope that these costumes make you smile. 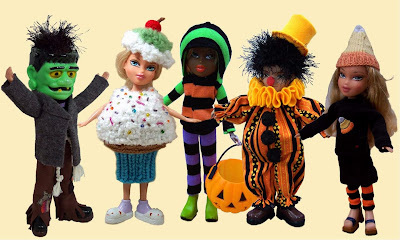 The photo above shows 5 of the 10 Bratz dolls that I costumed last October. After I made each one I placed it on my mantle in the living room and every time I passed by I just had to chuckle at the growing group. That's Frankenstein on the left, who is trying to scare everyone. Next in line is the cupcake girl complete with frosting and a cherry on top of her head. I call the middle one Hoodie girl. She's in Halloween color knits made from striped socks. Fourth from the left is a boy clown with a wig that I crocheted from fun fur and finally is a little girl with a candy corn hat that I knitted.  She's also sporting a candy corn sweat shirt, a black skirt and orange and black leggings.

I’m in a group on ravelry.com called Good Things Together in which one of our threads is called The Dollhouse. This year will be the third consecutive year in that thread that we are having a Halloween doll fashion show. I haven't started my costumes for this year so I'm sharing some that I made in the past two years.

One of the careers I wanted to do when I was a child was fashion designer. I guess I still have that love deep inside because my favorite TV show is Project Runway. Along the way, in years past, I also designed and made costumes for college theater productions. 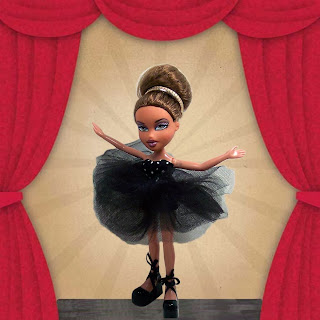 Here’s my black swan Bratz from last year. I did make a little black partial mask but it is not on the ballerina in this photo. 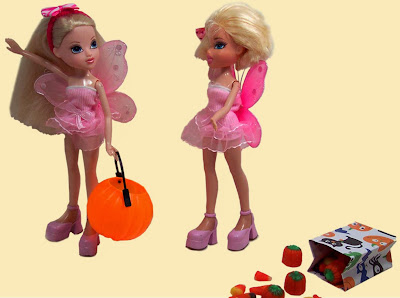 Photo above: I call these two little fairies Paris Hilton and her sister. They got scared out trick or treating and, while trying to run, one of the girls dropped her bag of goodies and everything spilled on the ground.

These fairy costumers were so easy to make! I used little girl’s frilly socks for the clothing and found the butterfly wings at the dollar store. With only a little sewing to close up the panty part of each costume, the outfits were done in a flash—very little fussing. 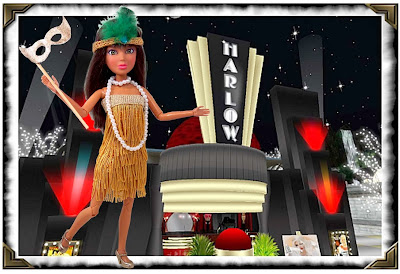 Photo above: I did manage to make this flapper outfit, as modeled here by a Liv doll. They have proportionately larger heads than Barbies.

While I’m at it, I’ll include two more photos from the year before. Below is another Liv doll as a nightclub singer. 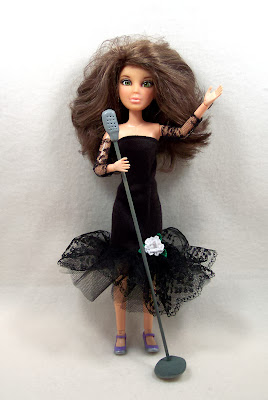 The basic dress is from a commercial pattern. I crocheted the flower which took longer to make the whole dress! I also made the microphone and base formed using Fimo clay that I installed on a thin dowel.

The Liv dolls are so much fun to pose. While no longer manufactured and rather short-lived in production, they are still easy to find at thrift stores for very little money and on ebay. They are bald but have wigs that fit with a nob on the crown of the head. Many times, if I have a head that I like from another kind of doll but the body is not articulated and can’t be posed as well, then I match skin colors of body to head and switch them out.

Finally, here is my Carmen Miranda outfit on the right, made two years ago.

Not everyone knows Carmen Miranda unless they are as old as I am or if they are old movie buffs. Carmen Miranda was a very popular movie star, singer and entertainer in the 1940’s and 50’s. She wore the most amazing costumes with fancy headdresses.

I sewed the costume (no pattern) and crocheted the pineapple (also no pattern) and formed the bananas from Fimo clay. The grapes are little felted wool balls.

I am including a close up of the headdress. 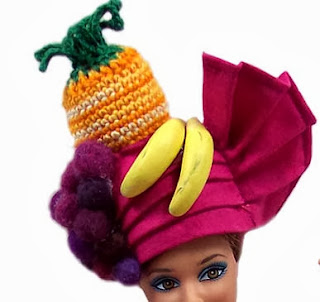