The purpose of this blog page is to demonstrate how to make easy and perfect pom poms for all of your projects. In this step-by-step tutorial, I will make the small pom pom that was ultimately attached to the crocheted Easter bunny egg cozy pictured here.* 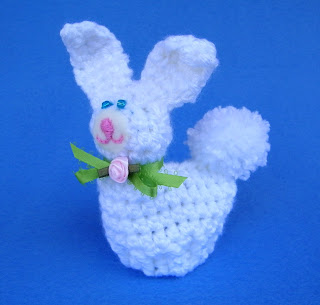 *This same size pom pom would be perfect for baby and children's size hats, too.

Let's get started.
Materials and Tools: To get started you will need a small amount of craft foam, about the size of a small index card. If you don't have craft foam handy and want to make a pom pom right now, you could use cardboard that is about the same density as a cereal box. The reason that craft foam is recommended is the templates you are about to make, if cut from the foam, can be used over and over but the cardboard template may only last through the making of one pom pom. 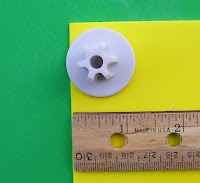 Step 1: For a small pom pom like the one shown here, look around the the house for a circle that measures between 1 inch and 1.25 inches across (approximately 3 to 3.1 cm) around which you can draw to make two identical circles on the foam. A medicine cap might work, if it is small enough. For this project, it must not exceed 1.25 inches. I found a loose item in the junk drawer that was just about the right size.

Step 2: Draw around the cap or other item you found and make two circles. Pencil in two small circles in the center that measure no larger than 3/8 of an inch (1 cm) and then draw a radial line from the center to the outer edge on each circle. 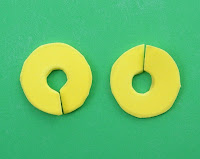 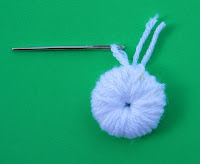 Step 5: Thread your tapestry needle with your selected yarn so that the double strand measures at least 3—4 feet (more than 1 meter). No knots needed. Now, holding onto the tail end to start, go around and around the layered circles filling the hole and and distributing the yarn as you go. Your developing pom pom should resemble the photo on the left. 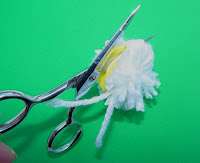 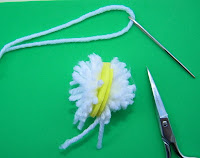 Step 6: If you have not adequately filled up the hole, as in the photo above, you may have to thread your tapestry needle again with more yarn to complete the process. When done, insert your scissors in between the two circles and cut the yarn going all the way around the template. DO NOT REMOVE the pom pom from the template at this point.


With a 20 inch strand of yarn, carefully insert it between the two circles, encircling all of the cut yarn. Bring the ends up and cinch very tightly as you tie twice to secure. You can go around again and tie it again. It is very important that the yarn is cinched as tightly as you can make it so that your pom pom stays in tact. 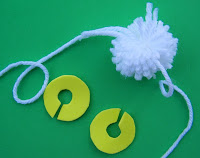 Step 7: Using the radial cuts to assist you for easy removal, you can now free the pom pom from the template.

Step 8: Holding the long yarn ends up close to the pom pom, stand over your trash and trim bits of yarn that stand out. You want your pom pom to be uniform all the way around.

Use your long yarn tails to attach to your project.