As if I don't have enough to do, I've inaugurated a third etsy shop called 2Good2Eat. Well, it was inevitable with so many fun and fanciful non-edible goodies to create. How could I not think of a shop filled with cupcakes, doughnuts, sundaes and other yummy delights? AND, they serve useful purposes, too.

ABOVE: Here's my new (for now) shop banner with yellow and white doughnuts which are actually knitted pincushions. One doughnut features lemon "frosting" over a dark chocolate base and the other is vanilla over a regular cake doughnut. They look yummy enough to eat but you wouldn't want to take a bite or you would have a mouthful of yarn and worst of all—straight pins. Yes, that's right, the "sprinkles" are actually metallic headed pins. 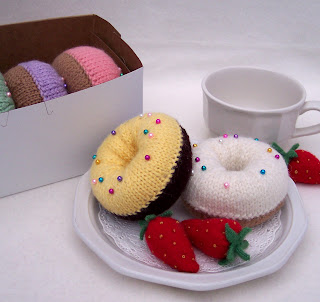 SECOND PHOTO: Here is the photo from which the narrow banner was extracted so you can see more of the doughnuts. I even found a doughnut box for this photo. Look at the variety of frosted doughnuts inside!
I found a great little pattern for these knitted doughnuts and want to share a link with you so you can make them, too. First, though, it is important to explain a few modifications I recommend for best results using the pattern.
Modifications:
1. The pattern calls for size 0 (2 mm) needles. The reason given for such small needles is to make the stitches tight for use as a pincushion. Instead, I used wool yarn and larger needles: size 6 (4.25 mm) and size 7 (4.5 mm). After finishing and stuffing the pincushions, I felted the doughnuts by putting them in with a load of towels in the washer and then dried them in the dryer with the towels. The felting (shrinking and fusing of fibers) made the stitches closer together. Be sure to have plenty of towels or clothing items in with your doughnut(s) because it is the agitation that makes for successful felting.
2. The pattern does not provide a finished size for the doughnuts but mine have a footprint of 3.5 inches (9 mm) to 4.5 inches (11.5 mm). I think this size is larger than might be yielded with size 0 (2 mm) needles.
3. After making a batch of these doughnuts, I found it best to use a slightly smaller size needle for the frosting half and a slightly larger size needle for the bottom (cake part) to make them even.
4. The pattern suggests using poly fiberfil for the inner stuffing. I found that this type of product, used in most decorative pillows, is not substantial enough to confidently support sharp pins and needles. It is too squishy and doesn't have a heavy enough feel. Instead, I rolled up felted wool (not too tight, not too loose of a roll) from old sweaters and made an inner ring around which the knitted outer doughnut fits. To do this, I made sure that the wool was wide enough so that the rolled cylinder was longer than necessary. Once rolled, then I basted the long edge to keep it together. I placed the knitted doughnut around the cylinder and began stitching the doughnut together. When I had about two thirds of the doughnut stitched, I trimmed the cylinder to size and hand stitched the cylinder layers together working from the back to the front. DON'T leave out this step; the cylinder must form a neat ring by being joined or your doughnut will not be uniform.
Links:
Okay, so here is the link to the pattern: Knitted Doughnut
And, be sure to drop by for a visit to my new etsy shop:  2Good2Eat
Finally, these are the best kind of doughnuts—ZERO calories!
Posted by Claudia at 2:19 PM